CBD: Cannabidiol – Legal Hemp for Health: The ultimate guide to CBD-rich medical marijuana, including CBD oil, Rick Simpson oil, and cannabis for pain and other ailments

Product prices and availability are accurate as of the date/time indicated and are subject to change. Any price and availability information displayed on [relevant Amazon Site(s), as applicable] at the time of purchase will apply to the purchase of this product. 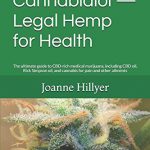 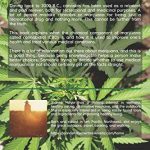 Dating back to 3000 B.C., cannabis has been used as a relaxant and pain reliever, both for recreational and medicinal purposes. In this book you will learn everything you need to know about cannabis, including:

There is a lot of information out there about marijuana, and this is good because being knowledgeable helps a person make better choices. Someone trying to decide whether to use medical marijuana or not should certainly get all the facts straight. This book explains what the chemical component of marijuana called cannabidiol (CBD) is, and how it is used to improve one’s health and treat various medical conditions. A lot of people mistake Cannabis or marijuana for being just a recreational drug and nothing more. This cannot be further from the truth. While the leaves and flowers of the hemp plant are indeed used to produce pot, these and its other parts — the stems, roots, and seeds — are also made into hemp fiber, rope, paper, building materials and textiles. Another byproduct of the plant is hemp oil, which can be consumed as food, used as fuel, or made into an ingredient in lotions, cosmetics, and other body care products. Lastly, and of perhaps the greatest value, the hemp plant serves medicinal purposes. The general perception of marijuana is overwhelmingly negative, as it is well known for being a psychedelic drug. In recent decades, a shift in perception has occurred, and now, more and more people are becoming aware of the medicinal benefits of the hemp plant. The fact is that marijuana has been used for medicinal purposes for thousands of years already. Medicinal marijuana was used in ancient China, and then in other parts of Asia and on to the Middle East and the African continent. Its main medicinal use was as an anesthetic or pain reliever. The active chemical components of Cannabis are called cannabinoids. We are interested in the cannabinoids because they are the ones that have been tested in laboratories and shown to possess the medicinal properties that marijuana has. Cannabinoids have such a potent effect on the human body both medicinally and psychoactively because they work very much like the natural hormones already present in our body. These naturally occurring hormones are called endogenous cannabinoids or endocannabinoids. They fulfill a useful role in keeping the body healthy; they help maintain internal stability and facilitate communication between cells, in the same manner that brain neurotransmitters function. While some choose marijuana for its hallucinogenic properties, cannabidiol, or CBD, doesn’t have any psychoactive or mind-altering effects, meaning that it doesn’t cause a high. This is considered to be a major advantage for proponents of medicinal marijuana because treatments and drugs that have the least number of side effects are naturally preferred. Medicines that don’t have mind-altering properties are of course considered safer than those that impair mental processes. Another advantage of CBD is its potency and versatility as a medicinal agent.

There are no reviews yet.

Only logged in customers who have purchased this product may leave a review.